Markets—especially the capitalist sort—are frequently imagined as ecosystems. Corporations, like wolves, clams, or algae, are locked in a constant struggle for survival. Find your “niche,” grow your business, outcompete your competition, and devour your prey—or perish. “Eat or be eaten.”

In spite of the savageness and inhumanity featured in this Darwinian portrait of capitalism, its most ardent defenders regularly paint that same inhumanity as capitalism’s greatest strength. Social Darwinists in the mold of Friedrich Hayek (a 20th century right-libertarian economist) or Ayn Rand (an author and philosopher most well-known for her anti-welfare bent) have long insisted that the “survival of the fittest” nature of the market meets human needs better than non-market alternatives. As corporations compete in an evolving struggle to sell their goods, Social Darwinists say, the wants and needs of the consumer are met in more and more efficient ways. As recently as 2015, economists with Boston University published an essay arguing this—a point which is remarkable given how obvious capitalism’s pitfalls become once you consider markets as Darwinian ecosystems.

To demonstrate why a Darwinian free market tends (or would tend) to fail, I wrote a very basic evolutionary model of capitalism in Python. Keep in mind that this is just a model; as in my last piece for Current Affairs, this is nothing more than an attempt to mimic and explore the consequences of one popular understanding of the free market. It should not be mistaken for either a predictive or descriptive representation of the real world.

You can find my model here. Please let me know if you find anything interesting!

Here’s how the model works: every generation (think a round of Darwinian fight club) 10,000 simulated corporations are created, all with slightly different “DNA.” Some may be more selfless, others more selfish; some may obsess over extracting natural resources (labeled in the model as “extractive”—think mining or tree-cutting) while the others gain their wealth by stripping it from society (labeled in the model as “exploitation”—think cutting welfare, privatizing utilities, or selling off public roads). At the end of every cycle, the most successful corporation passes on its “genes” while the others perish. In a phrase: survival of the fittest.

So far, this model matches the market-Darwinist view to a T (if a bit simplified). Running it at this point shows the obvious; the most profitable (read: extractive) corporations succeed, while both selfless and exploitative corporations fail.

While not ideal, such a system would not be dire. Given infinite resources, the model suggests that corporations would simply learn to extract more from nature—perhaps never selflessly giving to society, but never taking a great deal either.

Of course, we are a long way from having infinite resources. So, to make this more useful, let’s add one essential wrinkle: scarcity. The world is finite, after all, and ecosystems are only able to sustain so much extraction before they collapse. To that end, this next model begins with a set amount of resources and a set rate of ecological recovery (i.e. the rate at which oak trees regrow in a felled forest). Over time, the model also accumulates some of those simulated resources into a “social fund” meant to simulate state resources (schools, roads, welfare) as determined by each corporation’s “selflessness” trait. Every corporate entity subtracts from the total resources over time—and will adapt to prioritize extraction (taking resources from nature), exploitation (draining the social funds), or selflessness (returning some portion of their wealth to the social fund). Let’s see what kind of world that creates: 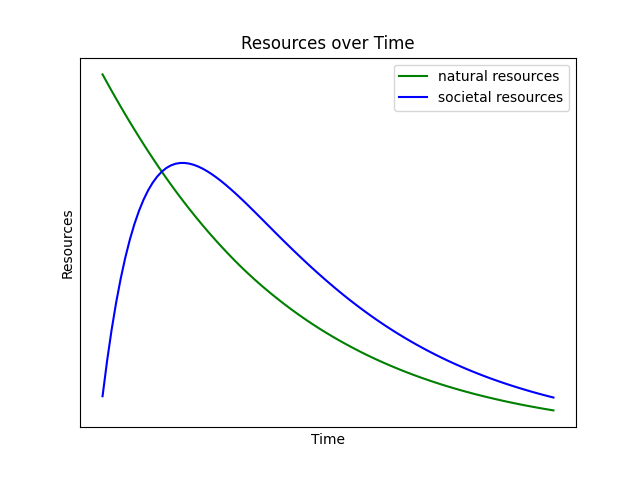 The results, as you can see, are catastrophic. For one thing, the rate at which corporations are extracting natural resources rapidly outpaces the ability of those ecosystems to replenish. This results in a total collapse of both natural and social resources over time. For another, the “selflessness” of each corporation falls precipitously as they learn to extract from the social fund rather than pay into it. If this happened in the real world, it would be a disaster which would be incomprehensibly destructive. Imagine every tree being cut down before it had a chance to spread its seeds. Imagine that being followed by every public utility—schools, highways, train stations—being privatized, stripped of their copper wire, and left to crumble in a lifeless world.

Though some have insisted that the free market is the solution to climate change and ecological collapse, this model shows the opposite. The very same Darwinian selection that libertarians insist creates optimal corporate efficiency also demands that those corporations engage in ultra-short-term thinking. It doesn’t matter (in the  model or in reality) if your corporation’s sustainability practices will result in greater profits in 30 years if more extractive and less conscientious capitalists will use their short-term gains to buy you out, monopolize your market, illegalize your business, or steal your consumers tomorrow. It’s important to underline that morality has no place here. In the Darwinian model, a corporation which expends resources cutting pollution, protecting long-term resources, or caring for its community will inevitably be out-competed by selfish competitors—a process you can observe in the chart above.

In the natural world, this problem of excessive growth has caused extinctions in the past. Two billion years ago, for example, the rise of oxygen-breathing life depleted Earth’s atmosphere and apparently destroyed 99 percent of life on the planet. Without a balance between carbon dioxide-breathing and oxygen-breathing life, oxygen supplies became so scarce that nearly all life on Earth choked on empty air. In fact, periods of ecological stability in Earth’s history have always relied on incredible complexity and diversification (which mitigated the success of any one species). These are the exact traits which our increasingly monopolistic variety of capitalism is dutifully killing off.

The kind of over-extraction which this model predicts is already occurring. Wild fisheries around the world (for just one example) are not only being extracted from faster than they can recover, they are being fully depleted. Near the turn of the century, fish stocks in Newfoundland crashed from 800,000 tons fished annually in 1960 to less than 100,000 caught in 1991. Far from a gradual shift in which fishing companies could learn to profit from sustainable practices, this sudden collapse forced a massive government intervention to ban fishing and caused a drastic and sudden depression of the local economy. This story is not unique; the U.N. has reported that more than a third of the world’s fisheries have been depleted.

For more than 30 years, The Donella Meadows Project (named after the late ecologist and columnist) has been evaluating remaining ecosystems and attempting to quantify how much longer they can sustain our current economic systems. Her report, aptly titled “Limits to Growth,” has issued increasingly dire warnings that current rates of production and consumption will inevitably lead to ecological collapse. At that point, it will be too late for corporations (or people) to save the sources of extractive wealth. In other words, once it becomes more profitable to sustain than to extract, it will be too late to do either.

To put this all simply: if capitalist markets really are Darwinian, it’s clear that they select for ultra-short term and extractive thinking which will lead to massive ecological collapse at best, and human extinction at worst, if left unchecked. A genuinely Darwinian approach to free market economics would conclude that there is far, far too much natural selection at work.

There may be room for discussion on whether non-extractive forms of capitalism are possible — and indeed, whether they could outcompete traditional extraction in the free market. That said, recent revelations on the massive carbon cost of NFTs and Crypto-Currency makes such a transformation seem unlikely.

While the above is certainly true (and critical to understanding our current moment), it is not a new thought. David Attenborough, the famed British naturalist, has been saying some variation of “infinite growth is impossible on a finite planet” for decades. That said, this model does offer one additional insight. If we look at the accumulation and eventual depletion of social wealth in the model, we can perhaps gain another perspective on the ever-difficult-to-define “neoliberalism.”

After the dissolution of the Soviet Union, its massive centralized infrastructure was privatized, liquidated, or simply ripped apart and sold for parts. In a flurry of defections of Soviet agents (President Vladimir Putin included) and western capital interventions, the former Soviet Republics issued stock in state corporations to private citizens, who sold their shares out of desperation or misinformation, resulting in total privatization. In the model, this would be visualized as a sudden exploitation of social wealth. Indeed, as the supply of natural resources drains from the model, similar socio-exploitative strategies (such as the plundering of the Soviet state) become popular within the model and eventually outstrip the extraction of natural resources altogether, as shown below.

Seeking not only to maintain but to increase profits, surviving the struggle of Darwinian free markets requires extracting profit from society itself rather than the natural world—asset stripping, privatizing, and exploiting whatever and whomever possible in order to get a leg up on their competition. Imagine every highway becoming a tollway, every school becoming private, every park being sold to developers, and every streetlamp being stripped for its copper wire, as corporations are locked in a Darwinian struggle to squeeze every last penny they can out of a dying world. After all, if markets are truly Darwinian, this shift is not a choice but an inevitability.

In the capitalist ecosystem, exploitation, extraction, and selfishness are requirements for survival; expecting corporations to behave differently, in this model, is like expecting wolves to go vegan.

If this is the case, and if the shift in strategies this model predicts is really taking place, we can come to understand neoliberalism as a tendency of corporations to turn toward exploiting social wealth (welfare, public utilities, etc.) in place of extracting natural resources as the natural world begins to run dry. Neoliberalism may be more than a regime of deregulation and privatization with an incredible human cost—it may be our final warning that capitalism’s “good times” are coming to an end. If we do not act to end the “free market” which selects first for ecological destruction, then for societal exploitation, and finally, for mass extinction, fossils and computer models may be our only legacy.

Our eclectic and verdant rainforest issue!